Warning! Unfortunately your browser has disabled scripting. Please enable it in order to display this page.
18 March 2022

Weapons, cash and drugs valued at hundreds of thousands of pounds were seized in a Yorkshire and Humber Regional Organised Crime Unit-led operation to target so-called County Lines crime. 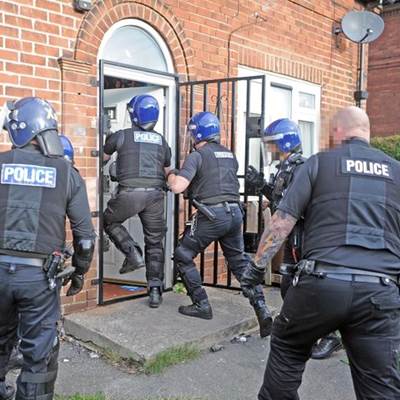 The week of activity took place from 7th to 13th March and saw a total of 107 arrests across the region.

County Lines crime involves the moving of illegal drugs from one area to another, often across police and local authority boundaries, and usually by children or vulnerable people who are coerced into it by gangs.

The 'County Line' is the mobile phone line used to take the orders of drugs.

Among the drugs seized were £300,000 of cannabis edibles. The drugs, made to look like sweets and packaged in colourful packets were expected to be distributed from West Yorkshire to areas across the country.

A total of 32 ‘County Lines’ mobile phones used by dealers to arrange the supply of drugs were seized as well as nearly £193,000 in cash.

Among the weapons seized were two machetes, knives, axes, batons and metal spikes.

In addition, officers visited 34 cuckooed addresses, where vulnerable people are being exploited by criminal gangs in their homes for criminal gain.

“The criminality connected to County Lines has a direct impact on the communities of Yorkshire and The Humber.

“It leads to violence, acquisitive crime and the exploitation of vulnerable victims, many of whom are forced to do the dirty work on behalf of others.”

“By continuing to target and disrupt the activities of County Lines gangs, our aim is to reassure the communities we serve that we will not tolerate the actions of these criminals and will continue to take action against them.”

“We are grateful for the support of and will continue to work with our four regional police forces, British Transport Police and other partner agencies to tackle all forms of serious and organised crime and to safeguard the exploited and vulnerable. We would encourage anyone to come forward with information about the activities of these groups.”